Editor’s note: Fr. Pan, who serves the Chinese Catholic Church in Vienna, Austria－the “Music City”, was invited by “Faith Weekly” to introduce the impact of the epidemic on local people’s lives, and share his beliefs and living conditions during this period.

The novel coronavirus epidemic raged in this spring, which made the whole world been helpless. With the strengthening of prevention and control measures in various countries, people all over the world joined together to fight against the epidemic. The epidemic situations in China and other Asian, European countries have been improved and stabilized, all trades and professions have gradually returned to normal.

Two months ago while the epidemic was breaking out, the Austrian people were also scared because they did not know how harmful the virus was and when it would end. Also, we had no effective prevention and control experience. The shortage of medical supplies greatly affected people’s normal lives.

The epidemic broke out in Austria in early March and worsened rapidly. On March 14, the Austrian government announced that it would lock down the country and cities to combat against the epidemic in all aspects. When the epidemic began, most Austrians did not realize the seriousness of the disease (at first, two thirds of the Austrians paid no attention to the epidemic; only one third strongly urged the government to take action), but overseas Chinese were much concerned about the epidemic and some of them began to store household goods and food at the beginning of the outbreak. They stayed at home to avoid the spreading of disease. According to the European anti-terrorism laws, it is not allowed to mask your face, otherwise you will be fined. Such laws leave many overseas Chinese frustrated and helpless. It was not allowed to wear masks until March 14, when the city was under full control, but many locals could not accept it.

I’m particularly appreciated the friendly cooperation with the Chinese faithful and caring people from all society in the fight against the epidemic. In this critical moment when epidemic prevention supplies were seriously insufficient and many people’s lives were threatened, providing timely help for the affected areas and countries is a demonstration of Christ’s supreme love.

When the epidemic broke out in China, the Chinese catholic in Vienna took action actively after contacting Jinde Charities. The laity purchased medical supplies successively in Germany and Austria, joined together with domestic church to deliver the supplies to hospitals in Wuhan and medical organizations in Italy. In the meantime, the Chinese catholic in Vienna, together with Ms. Song, also delivered a batch of supplies to some elderly homes in Vienna and New York. We were comforted when those medical workers could get these protective supplies which were lacking in hospitals. We hope that all the affected people can get help through our efforts.

Later, when the epidemic situation in China improved but spread abroad, the Chinese faithful and caring people from all walks of life provided support to foreign countries and regions. A convent and a Chinese church in Vienna also received the necessary supplies.

Sending relief supplies to the affected areas is the perfect interpretation of faith, the mission of the church, and also the demonstration of the spirit of Christ’s love. I would like to thank all the clergy, faithful and all the brothers and sisters from all society who have made efforts to support the fight against the epidemic. It is your efforts and contribution that make the church and our society full of love.

The epidemic’s peak in Austria lasted for more than a month－from mid-March to mid-April. During this period, everyone was required to stay at home; their lives were extremely restricted. Students were not allowed to attend classes normally; office workers could not go to work and had to stay at home. The Austrian government provided subsidies and support to all the workers who cannot work normally during the epidemic. But for those who did not have stable jobs, it was very difficult for them to pay the daily expenses.

During the epidemic, because many senior nuns lived here, for the health and safety of myself and others, I lived in a convent all the time and never went out, and others were not allowed to go out or meet friends. So we could have Mass every day. On the other hand, I also received the prevention and control instructions from the diocese and other institutions every day. All made me feel very warm, reassured and motivated. In this special period, I felt more concern from bishops and other Chinese groups.

I read a lot of prevention and control information guides every day, translated many German materials and passed the information to Chinese Catholics and other overseas Chinese. Since we cannot go out to meet, I can only keep in touch with laity via the Internet, telephone, WeChat, religious articles or live video broadcast, etc.

During this period, the Austrian Bishops’ Conference drafted and issued a lot of specific prevention and control programs and regulatory directives, so that all dioceses and parishes can protect and fight against the epidemic under a unified and effective legal framework. At the same time, the dioceses also conducted comprehensive prevention and control, spiritual companionship and guidance as well as liturgy live broadcast through national radio station and the Internet.

In addition, I would like to mention in particular that Austria is a Catholic country with a large proportion of believers, and the influence of the church is also enormous. When the epidemic broke out, the country’s prime minister and government leaders at all levels continuously contacted and exchanged ideas with bishops; they worked together to formulate a legal framework and effective implementation plan for the prevention and control of the epidemic. The government respects and attaches great importance to the church, and the church also trusts and supports the government very well. It should be said here that the overall control and fight against the epidemic in Austria are praiseworthy.

Special thanks to the Chinese ambassador to Austria and the staff of the embassy for their best efforts to send the raised medical supplies to China and their support to Austria later. Many Chinese chambers of commerce, associations, institutions, religious groups and individuals strove to raise supplies and guaranteed the transportation. During the epidemic, everyone, including overseas Chinese, followed the national, Embassy and church safety prevention and control guidelines. All of these are important factors for the effective control of the epidemic in Austria in a short period of time and the gradual return of various industries to normal.

According to my personal experience in Austria, the phenomenon did exist that some Austrians shifted the blame onto China, rejected or attacked overseas Chinese because of the epidemic, but there were very few holding this attitude; most people strongly opposed such discrimination. As the Auxiliary Bp. Scharl pointed out, “Because of the pandemic caused by novel coronavirus, some people in some countries always associate the virus with China and overseas Chinese, which has led to the discrimination against overseas Chinese and Asians in some places, and some innocent Asian individuals were even attacked. ...We strongly oppose such racial discrimination!”

Finally, thanks to God for making us aware of human weakness in the epidemic and developing unlimited trust in God; also thanks to the people of China and Austria for we carried out effective prevention and control measures and have achieved a staged victory through mutual support and concerted efforts. At the same time, it also makes us understand when we are faced with difficulties or challenges, how important it is to maintain healthy mentality, respond to the situation actively and never lose hope in order to win the final victory. 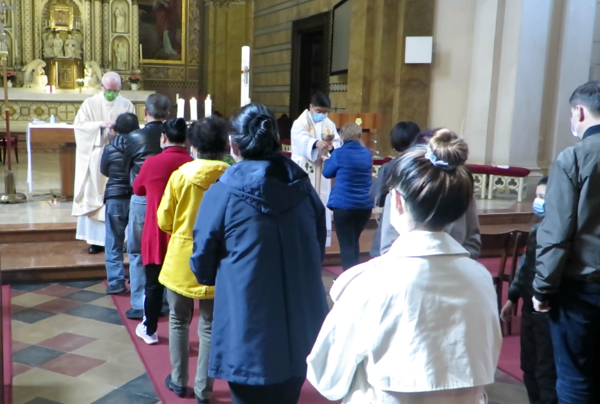 On the seventh Sunday of Easter, Chinese Catholics attended the Thanksgiving Mass presided by WB. Franz Scharl of Archdiocese of Vienna on the Ascension Day.